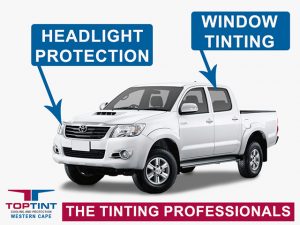 Did you know that you can have all the tinting for your Toyota Hilux and other vehicles done at TopTint in George? This includes Window Tinting for the vehicle and the canopy as well as Headlight Protection Film applications. Contact their head office in George for more information on window tinting applications throughout the Western Cape!